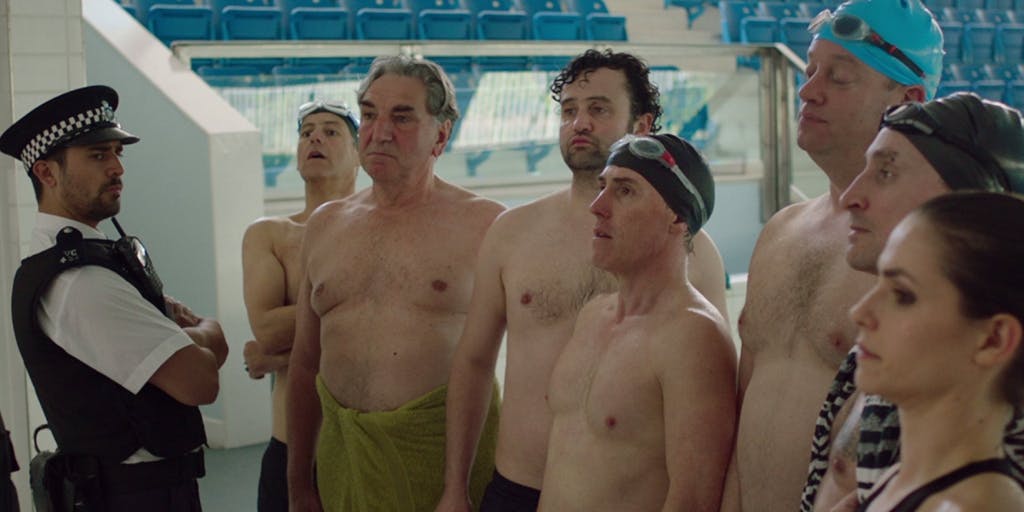 Published July 9, 2018 By Luke Channell
Review of: Swimming With Men

While it’s unlikely to live long in the memory, Swimming with Men provides enough underdog spirit and charm to keep its head above water.

Eric (Rob Brydon) is an accountant facing a midlife crisis. He’s fed up with the monotony of his office job and his relationship with wife Heather (Jane Horrocks), who’s recently been elected as a local councillor, is increasingly strained. His only escape from the dreary routine of his everyday life comes from swimming laps at a public pool after work. During one particular session he meets an all-male synchronised swimming team and soon finds himself joining their crew and bonding with the other 7 members, all of who have their own personal demons. Stand outs include boisterous elder of the pack Ted (Jim Carter), group leader/organiser Luke (Rupert Graves), failed footballer now builder Colin (Daniel Mays), and cheeky young lawbreaker Tom (Thomas Turgoose). They’re a rather mismatched bunch but professional swimmer and pool attendant Susan (Charlotte Riley) spots potential and encourages them to compete in the unofficial world championships under her guidance and training. Through this unlikely sport, Eric finds a new lease of life which brings him back from the brink of crisis.

Swimming with Men is a pretty undemanding affair, with archetypal characters and a formulaic plot. That said, there’s enjoyment to be had from an array of committed performances. Brydon puts in a heartfelt, witty turn that captures the pangs of middle-agedness, even if his on-screen chemistry with Horrocks is non-existent. Turgoose and May’s back-and-forth banter and camaraderie works well, and their chemistry cultivates laughs as well as poignancy. But it’s Riley who shines with a charming, honest performance – you feel her genuine pride for this band of male misfits who triumph against the odds. Also, the film’s swimming sequences are often genuinely impressive, and Parker brings a visual flair to these scenes with some arresting underwater camerawork.

Where Swimming with Men falls down is in its overly-familiar themes and plot beats. Every box is ticked from the comedic training montages to the team fall-out just before the world championship. While an uplifting sequence at the synchronised swimming competition feels like a natural ending, the film oversteps the mark by wrapping things up in a corny, contrived scene which sees the team attempt to help Eric salvage his marriage. Eric and Heather’s relationship has been so underdeveloped that it’s hard to be emotionally invested in the film’s end-note. Swimming with Men also missteps in its effort to establish a love story between Susan and Luke, it’s an unconvincing plot thread that slightly devalues Riley’s otherwise strong performance. There’s a better film in here somewhere, but a lacklustre, cliched script hampers the its potential.

While it’s unlikely to live long in the memory, Swimming with Men provides enough underdog spirit and charm to keep its head above water.