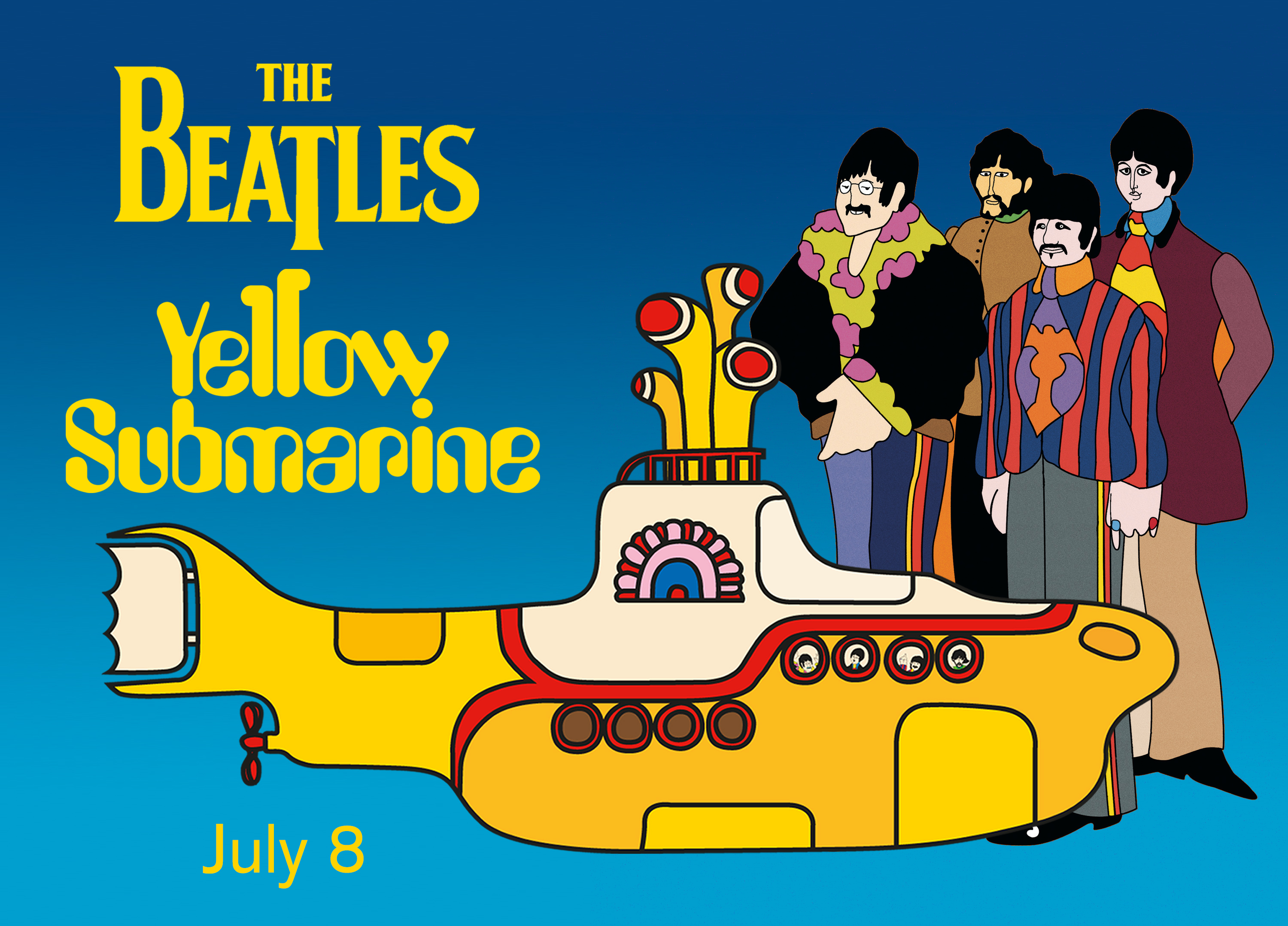 Where did the time go? Fifty years ago, if memory serves, when Yellow Submarine first hit theatres, I was mesmerized by the Gold Key comic tie-in owned by one of my neighbourhood pals. My other Beatle memory of 1968 was seeing the fab four on The Smother Brothers when their promotional films for “Hey Jude” and “Revolution” aired. I didn’t get to see the film properly until it began airing on TV in the 70s; by which time The Beatles had broken up and the decade they shook up seemed impossibly distant. However, as much as Beatlemania and nostalgia go hand in hand, the Chekhovian vibe of better yesterdays is kept in check by two things: the music remains as alive and vital as it did in the 60s, and our unending wonder that four Liverpudlians could do so much that was not just good, but great, in the space of eight years.

1968 was an absurdly busy year for The Beatles. They went to India to study transcendental meditation, launched Apple (not just a record label, but an ambitious multi-media company), recorded the 93 minutes and 35 seconds of new material that made up the double disc “White Album”, released the “Hey Jude/Revolution” single not on the album to mega-sales and airplay and began work on the “back to basics” live project that would emerge as the Let It Be documentary and album in 1970.

As individuals they promoted their pet projects at Apple. Harrison recorded the soundtrack for Joe Massot’s psychedelic lovefest, Wonderwall, and an even stranger album of dissonant electronica. McCartney micro managed everything from Mary Hopkin’s singing career to the fire sale that was the Apple Boutique. Ringo followed his cameo in Christian Marquand’s star filled Candy with preparations for a lead role opposite Peter Sellers in the star filled The Magic Christian (and I thought I was the ultimate Terry Southern fan). John met Yoko and proceeded to blend love, performance art and political activism with a Marmite effect on fans, press and public.

And that’s just a synopsis of 1968. If Yellow Submarine hadn’t been such a stunningly rare example of non-Disney animation, their involvement in this film might have been a footnote to all the other stuff they were up to. Instead, Yellow Submarine has endured as a perfect fllm for the whole family – it can be enjoyed by everyone from Teletubby crazed infants and doting grandparents to young marrieds on date night and drug fiends from all walks of life.

Keen to break from the mop top image they had solidified in A Hard Day’s Night and Help!, The Beatles had limited involvement in the third film owed to United Artists and originally saw Yellow Submarine as a contractual obligation. They had rejected unrelated screenplays by playwright Joe Orton and Manchurian Candidate novelist, Richard Condon. Yellow Submarine was generally seen as an easy win – a big screen spin-off of the fun, but not exactly groundbreaking cartoon series packaged by King Features. They agreed to write some new songs and make a cameo, but otherwise they wisely stayed out of the way and allowed Dunning and crew to develop a film that managed to gather the disparate visual influences of the decade – from pop art and San Francisco rock concert posters to the graphic design of Milton Glaser and Peter Max – into a seamless whole.

Not unlike the “ultimate trip” of 1968, 2001: A Space Odyssey, Yellow Submarine was a technically complex film that took a couple of years to make. Ensconced in cramped studios in Soho Square, George Dunning and his creative team, particularly art director Heinz Eldelmann, developed techniques by a combination of design and accident. Sequences like “Lucy in the Sky of Diamonds” made inventive use of rotoscoping – turning live footage of ballroom dancers into images that verge on abstract expressionism. The “Eleanor Rigby” sequence made startling use of still photographs tinted or drawn over to surreal effect.

Given the many names attached to the screenplay, including Love Story’s Erich Segal and uncredited Liverpool poet, Roger McGough, the plot of Yellow Submarine is deceptively simple. When the Blue Meanies attack the peaceful and happy denizens of Pepperland, Young Fred manages to escape via the submarine to Liverpool. Like a lost puppy, Fred and the submarine follow Ringo to the labyrinthian house he shares with the other Beatles. The Beatles agree to help Fred and after a mind-blowing nautical journey through increasing surreal landscapes – the respective Seas of Science, Monsters, Nothing and Holes (where they meet Jeremy Hilary Boob, a pretentious, but well-meaning creature), they end up in Pepperland, fight the killjoy Blue Meanies, and bring peace, love and understanding back to this benign fantasy land. The whole narrative is basically The Beatles, channelled by the animators, playing up to every fan’s secret wish for a sixties hippie utopia to triumph over materialism and totalitarianism. Even The Beatles liked the result.

Alas, by the time the film came out, the sixties dream had soured big time – the Tet Offensive, the assassinations of Robert Kennedy and Martin Luther King, the Soviet invasion of Czechoslovakia, student riots everywhere from Paris to Mexico City, ad nauseum. 1968 was a year in need of cheering up and Yellow Submarine supplied that in spades for a few more months. Alas, barely a year later, the break-up of the Beatles themselves would add to the bad vibes.

Pre-Yellow Submarine, Disney had a stranglehold on the popular imagination as to what constituted animation. In the immediate aftermath, films like The Point, with its Harry Nilsson script and songs, or Fantastic Planet snuck their way into the waking dreams of a generation. A good case can be made that Yellow Submarine encouraged artists as varied as Terry Gilliam, Jan Svanmajer, Hayao Miyazaki, Simpson’s creator Matt Groening and Robert Zemeckis to reach mainstream audiences. In 2009, Zemeckis spent considerable time developing a remake using state-of-the-art motion capture technology, but Disney – Blue Meanies that they can be at times – got cold feet.

But perhaps the most important legacy of Yellow Submarine is its confirmation, if any were needed, that the Beatles’ music endures into infinity as we know it. Although their physical participation was limited to a brief pre-credit coda, the four new songs they wrote for the film – “Hey Bulldog”, “It’s Only A Northern Song”, “It’s All Too Much” and “All Together Now” – are underrated gems. Along with producer and fifth Beatle George Martin’s instrumental score, these tracks, with other fab four classics, will always keep Pepperland alive and well in some timeless ocean world where the St. Pepper’s band, Old Fred, Jeremy and the nicer Blue Meanies rave on.