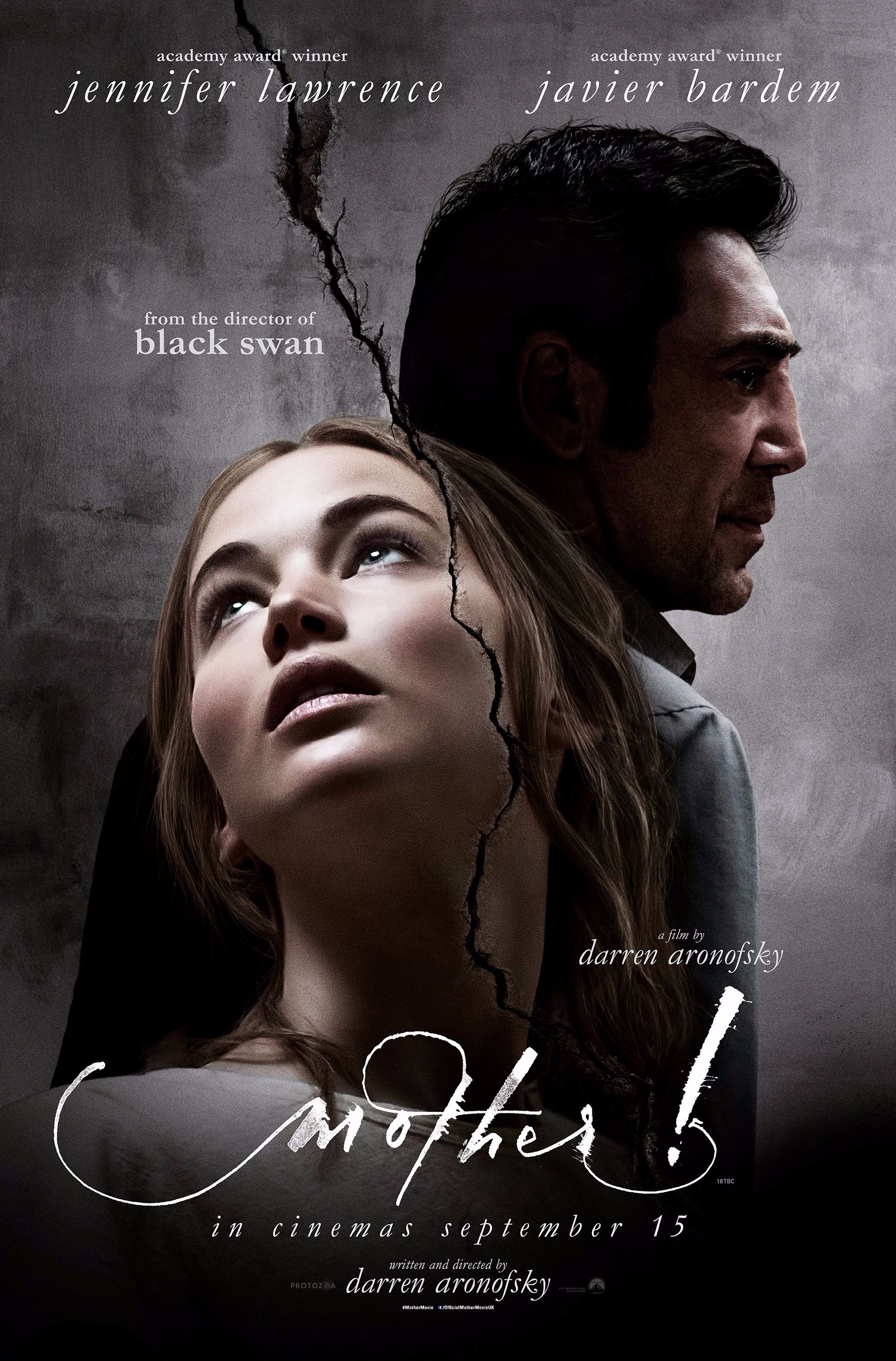 Darren Aronofsky’s Mother! introduces us to one of those golden couples lauded in social media, entertainment news and slavish profiles in Vanity Fair, Vogue or countless colour supplements. Javier Bardem is a celebrated poet trying to crack writer’s block as his new and younger wife, Jennifer Lawrence, works to renovate and redecorate their country house. Into this domestic Eden, disorder arrives in the form of a dying fan, Ed Harris, and his vivacious partner played with a delicious frisson by Michelle Pfeiffer. What happens between this quartet rapidly accelerates into a mash-up of Rosemary’s Baby, Who’s Afraid of Virginia Woolf, The Discreet Charm of The Bourgeoisie and liberal dashes of Pinter, Beckett and Ionesco for any absurdist theatre fans in the audience.

Aronofsky filters these influences – both obvious and subtle – through Lawrence’s point of view. As she seeks refuge from the chaos that takes over her dream house, she grows all too aware it has an inner life as dark and divided as her charismatic husband and the mysterious guests, visitors, fans, acolytes and just plain crazies he can’t resist inviting to stay. Cinematographer Matthew Labitque shoots Lawrence’s nightmarish perceptions with the vividness associated with a boozy party where time seems to slow down and speed up simultaneously.

Ably playing off Lawrence’s anxiety, Bardem gives his portrayal of a literary lion with a near cult-like readership a menacing bonhomie. Harris and Pfeiffer are so good as the smug, hedonistic boomer couple that their absence in the second half is missed. Overall Aronofsky makes droll use of his main players and the near literal “cast of thousands” who take over the house including a cameo from Kristen Wiig.

Mother!, an unusually brave release from Paramount, harkens back to the 70s when the mainstream was dominated by iconoclasts like Stanley Kubrick, William Friedkin, Mike Nichols, John Boorman, Roman Polanski and others (far too many men, I know). I am not entirely convinced Aronofsky has the depth of these directors (as a writer he is mainly interested in the masks people project to the world than the sensibilities beneath), but his control of this self-conscious narrative rarely falters.

Aronofsky’s ambitious attempt to merge horror, black comedy and social comedy may lack the precision of David Lynch’s surrealist epic Twin Peaks: The Return (likely to lead many top ten lists at year end), but whatever its few longeurs or pretensions (and Aronofsky wears these proudly), Mother! Is a hoot. After the ludicrous Noah, his overbudgeted and underwritten take on the Book of Genesis, Mother! is not only a confident return to the guilty pleasures of Black Swan, but reaffirms Aronofsky’s ability to deliver the immersive experience that made his second feature, Requiem for a Dream, so memorable. Mother! doesn’t tear at the heart in the same way Requiem did, but as a wild allegory for our dysfunction as a planet, Mother! will liven up more than a few dinner party conversations about something other than Trump, Brexit or nuclear holocaust.

Lee Hill is a writer and consultant based in London, who has contributed to outlets as varied as SensesofCinema, Cinemascope, Sight and Sound and Resonance FM. He is also the author of A Grand Guy: The Art and Life of Terry Southern (2001) and Easy Rider: A BFI Modern Classic (1996).