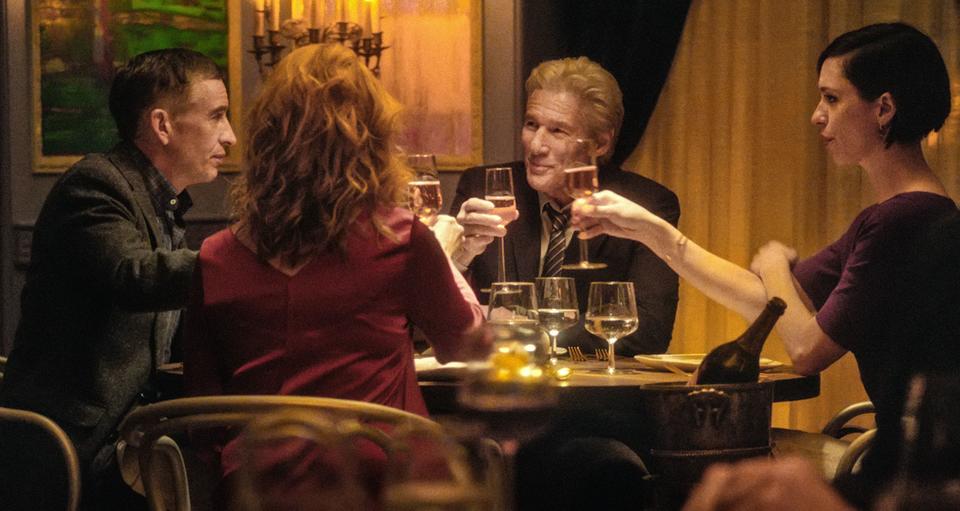 The Dinner is a drama set, unsurprising, around a dinner. Written and directed by Oren Moverman, the film follows Paul Lohman (Steve Coogan) and his wife Claire (Laura Linney) as they have dinner with Paul’s brother Stan (Richard Gere) a U.S. Senator and his wife Katelyn (Rebecca Hall). The couples discuss what to do about their children, who have put themselves in a bad situation.

That is where the crux of the movie lies, in a moral quandary between these four characters. We get a lot of flashback filler throughout the film, mainly focused on Steve Coogan’s character’s mental health issues. We also get the backstory about the children and see their actions committed in these flashbacks as well as seeing the cousins as they’re growing up and some of the dynamics between them, as well as their parents.

The performances are good, great even, especially the female actors. Chloë Sevigny is great but underused. When you get over Steve Coogan’s poor accent (which sounds exactly like an impersonation of Richard Gere) he is good as the disturbed Paul, whose skewed perspective is ours for most of the film. Richard Gere is confident throughout, and there are good moments between the two brothers, despite the writing. But that really is the only great thing about this film, everything else is either mediocre or verging on galling.

The drama of the film builds so slowly, you hope that when you finally reach the big reveal of the reason for the dinner, that the build-up will be worth it, tedium and all. Unfortunately, the reveal is when the film truly falls apart and starts to move into deeply offensive waters.

When the film eventually does get to the point — after a lot of muddled painting of the situation and the character of each character — it is ridiculous. The crux is horrendous, and not only offers no interest but is actually verging on distasteful. The characters trying to make this decision about the thing their children have done is meaningless, and only one of the four characters appears to act in a recognisable way.

The film also possibly tries to deal with race. I say possibly because whatever it is trying to do it does very tentatively, failing to make any point, but worse for even trying and it is no doubt a good thing it doesn’t try to push it any further. The plot is thin and nonsensical at times, the performances are very good but completely lost in this dull and confused drama.

The Dinner is in cinemas from Friday the 8th of December