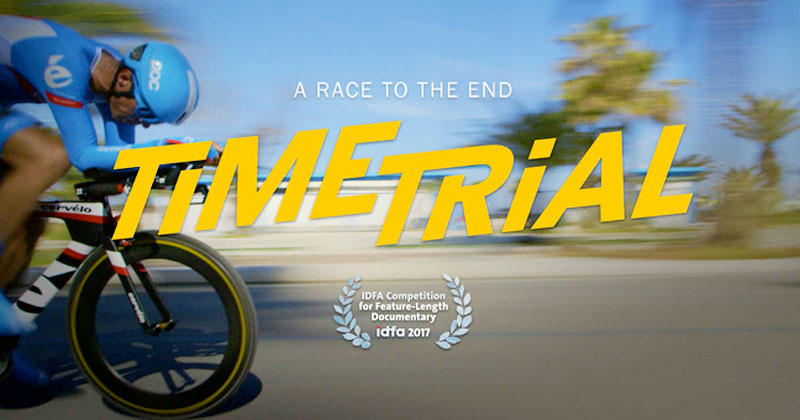 Time Trial is a mesmerising documentary portrait of Scottish cyclist David Millar. He competed in the Tour de France and other world class cycling events with success through much of the late 90s to early naughties. His career coincided with the period when the consensus culture surround doping was coming under greater scrutiny from the press, whistle-blowers and legal investigators. In August 2004, he was banned from the sport for two years. Like many a top cyclist, Millar did not exactly suffer from low self-esteem when he was accused of taking EPO, the illegal performance enhancement drug. He went through various stages of denial and self-reckoning before reinventing himself as the anti-Lance Armstrong.

Time Trial is the story of the second stage of his cycling career where he continues to compete, but also works as an advocate and model of clean racing. In collaboration with fellow Scot and filmmaker, Finlay Pretsell, Millar documents his final year, 2014, as a professional racer. The resulting film is a study of a proud, intelligent, self-aware and yet rueful athlete who accepts that “Personal Best” now takes on a different meaning as his professional career draws to a close.

Digital technology has made it possible for even the least active spectator to feel as if he or she is there whenever a sports event, from football to an Olympic decathlon, is broadcast. Still the cinematography in Time Trial takes on an entirely new dimension thanks to the planning of Pretsell and cameraman Martin Radich. The almost unimaginable speed that professional cyclists achieve is conveyed with first person immediacy. Time Trial contains moments when you will marvel at the focus the cyclists sustain on a often crowded course. Many of us would need some serious downers let alone EPO or training to handle the nerves the hairpin curves on a cycling route entail.

Time Trial is not a completely lone wolf affair. We also get to see other members of Millar’s team as well as fellow competitors. Thomas Dekker, a Dutch cyclist, David’s roommate on the tour, is as a wry commentator on events, who brings out the warmth and humour beneath Millar’s deceptive stoicism.

According to the press notes, Pretsell is also that rare beast – a cine-literate athlete. He cites Werner Herzog and Wim Wenders as role models and certainly that sensitivity to the power of visual storytelling lends Time Trial its distinction. Time Trial is film for all seasons and all kinds of film goers; a riveting evocation of what attracts individuals to professional cycling and the moral, as well as physical, odyssey that can result.