Back in 2013, James DeMonaco’s The Purge presented us with nightmarish vision of America in a near future in which crime has been made legal for 12 hours every year, leaving people free to commit the most unspoken atrocities without suffering the consequences. After two more lucrative sequels which failed to live up to the original film’s brilliant high concept premise, this week sees the release of a The First Purge, a prequel which is surprisingly far more engaging and politically sound than one might expect from a franchise which was in danger of losing its purpose.

Directed by Gerard McMurray and written by DeMonaco, relinquishing his directorial duties for the first time in the series, The First Purge offers a thought-provoking and heavily coded anti-Trumpian message which, despite not presenting the most subtle allegories and symbolisms, still manages to be effective in highlighting the current political landscape and the rise of far right and fascistic ideologies. 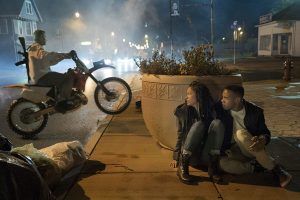 After years of political and social unrest, a new political party calling itself The New Founding Fathers of America (NFFA) has emerged rendering all other parties obsolete. With support from some of its most powerful and richest backers, the new government hopes to reduce crime by running a voluntary experiment which will take place on Long Island, New York over 12 hours from sunset to sunrise, allowing anyone who volunteers to kill, steal and rape to do so without fear of punishment.

Fiercely anti_NFFA political activist Nya (Lex Scott Davis) and drug dealer Dmitri (Y’lan Noel) finds themselves at loggerheads when it transpire that Nya’s teenage brother Isaiah (Joivan Wade) has taken up a job dealing for the gangster. Worried about what the night ahead might bring, Nya makes her brother promise to leave the island to stay with some relatives in the city. However, after a violent encounter with a mentally disturbed criminal, Isaiah decides to join the purge in the hope of getting revenge over his attacker. Soon the whole town is in flames when masked militias descend onto the poorest areas of the island and start killing men, women and children. Caught up in the middle of the chaos, Dmitri and his men decide to take on the militias in the hope of defending their neighbourhood for further bloodshed. Elsewhere, barricaded in their crumbling tower-block apartment, Nya, her brother and a group of equally terrified friends, must do all they can to stay alive until sunrise.

McMurray and DeMonaco offer a flawed, yet genuinely gripping film which manages to mix the usual horror tropes with worthy socio-political ideas to tell a thoroughly compelling story. Gathering a cast of mostly unknown young actors of colour, The First Purge is without a shadow of a doubt the most openly political film in the franchise, and while it lacks the subtlety of the first one, the film still manages to make a valid anti-authoritarian point in a world in which reality is slowly imitating fiction. Elevated by a well devised and suspenseful screenplay courtesy of DeMonaco, The First Purge does exactly what is expected from it, even if it ultimately relies too heavily on mindless violence and macho bravado to keep everyone on board for the duration. A commendable addition to an already hugely popular franchise.

The First Purge is in Cinemas from July the 4th.