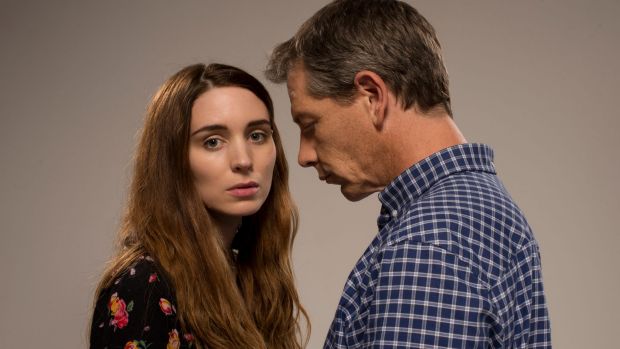 Armed with an English accent, Rooney Mara plays Una, a young woman who likes to party all night, promiscuous and devoid of emotional attachment to the world around her. However, she is harbouring a secret from her over protective mother, a photograph of a much older man, Ray (Ben Mendelsohn), a man she believed herself to be in love with, who she thought loved her in return. The photograph holds bittersweet memories for Una, memories that motivate her to track down her lost love to a factory where he now works and has changed his name to Peter.

Filled with fear and anger that his once forgotten past has turned up on his doorstep, Ray nervously carries out his work while Una, less than patiently waits for Ray to finally talk to her to thrash out the wounds of their past. As night fall’s the pair embark on a bitter and twisted conversation which ping pong’s back and forth as Una becomes even more tangled in her crazy head until boiling over into breaking point in its finale.

Starting with so much potential, building the picture and its initial first tension filled meeting between the two characters, but it quickly falls flat as the dialogue reveals in repetitiveness with any tension falling flat on its face after taking a dive off a high cliff. Circling around in an endless circle with Riz Ahmed’s supporting role thrown in intermittently to lead the story down a dead end of monotonous tedium.

Both Mara and Mendelsohn immerse themselves into their roles, interpreting the script to the best of their abilities with both a devious menace and developing foreboding insanity but this can’t help them break through the walls of the confining screenplay that simply does not adapt for its cinematic format. Riz Ahmed simply doesn’t have anything other to do than play babysitter to Mara’s Una constricting his talent to the bench.

Andrews begins well but fades fast in his adaptation of Blackbird. Tediously empty of empathy, Una, whilst desperately crying out to touch the soul of pure humanity misses its chance to engage on any level.

Una is released in cinemas and VOD September 1st