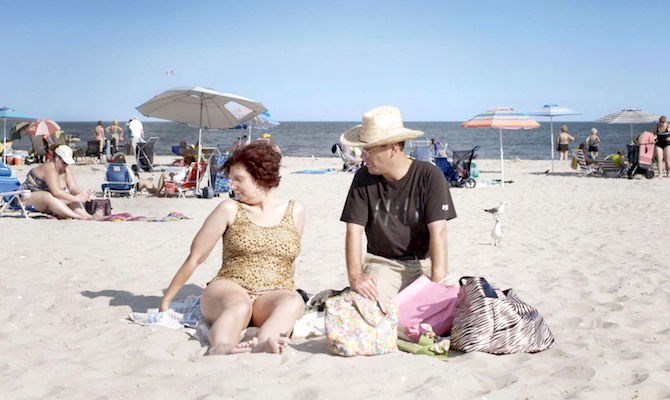 It’s a credit to Dogwoof and their impressive output that they have yet to release a single film this year that could be considered below par. The latest offering from this tireless outfit is every bit as exhilarating as the rest of their releases.

Presented as part of Sundance London Film Festival, Dina is a fantastic piece of filmmaking. This fascinating documentary is not only touching, funny and genuinely engaging, but it also deals with themes that not many filmmakers would dare approach.

Directed by Antonio Santini and Dan Sickles, Dina tells the touching story of a blossoming romance between two adults who suffer from learning difficulties. Acting like a fly on the wall, the film does very little to interfere with the story of the couple, instead letting it play out without interjections or narration. Dina Buno is getting ready to marry her fiancé Scott Levin after a short courtship. The couple seem to dote on one another and are happy to share with the director the love they have for each other. As the couple is slowly learning to co-habit, a problem arises when Dina is unable to get Scott interested in having sex with her. Hoping to get Scott more interested in a more physical relationship, Dina decides to gift him the infamous The Joy Of Sex book which he has very little interest in. It soon transpires that within Dina’s past lies a dark and violent episode which the viewer is only allowed to discover right at the end of the film.

Santini and Sickles approach the subject of romantic love between two people living with Asperger’s very delicately and allows the couple to talk uninterrupted about their fears and hopes for the future. The interactions are at times hilarious and very touching, as Dina talks about her past and longing for a more physical relationship with Scott, the film handles her wishes and thoughts without ever resorting to cheap shots or a facile approach. On the whole, Dina offers its audience far more than they’ve bargained for without being moralising or too serious. A veritable delight of a film.