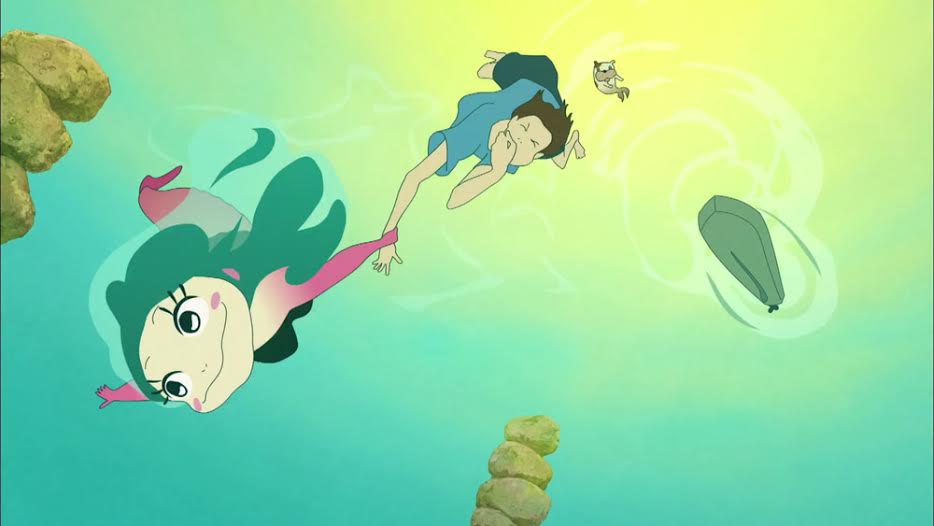 Film Review: Lu Over The Wall

Published November 29, 2017 By Rachael Kaines
Review of: Lu Over The Wall

Kai lives in a seaside town and is a quiet and glum teenager whose only interest is making music and uploading it to the internet. This changes slightly when some classmates convince Kai to join a band with them. Kai’s grandfather keeps warning Kai about the merfolk that live in the bay and the dangers of playing music near the water — the merfolk eat people apparently. During rehearsal, Kai meets Lu, a mermaid with a love for music and people and she gets involved with the group. The townsfolk are against the merpeople but enraptured by Lu’s dancing when the band perform. Que some mer-dogs, a giant shark-man, and soon the townsfolk and the merfolk have got to sort out their problems.

At first, it appears impenetrable unless you’re already into the genre and the subculture — the very beginning of the film is verging on tedious. But then that gives way to moments of beautiful insanity, like when Lu frees all the dogs in a pound and bites them so they become mer-dogs floating in water above the docks in a technicolour rainbow block of water summoned from the sea. I couldn’t help but be reminded of Adventure Time at moments like this (not surprisingly Masaaki Yuasa has worked on an episode of Adventure Time). The giant shark father is a work of genius as well and all the music and dancing is incredibly charming if a little odd at times.

The less said about the story the better. It works well, but it works best if you forget about it all and just be taken away by this irresistible and vivid world. I am quite willing to admit that I am not particularly well versed in anime. Whilst Lu Over The Wall is certainly not the best that the weird and wonderful genre of anime has to offer, it’s charms, of which there are many, will happily guide you through its overly-long runtime.

If you’re a hardcore anime enthusiast then I’m certain Lu Over The Wall will work for you. If you’re a casual fan you will enjoy it as well. If you’re new to the genre I’m not sure it will convert you, but it is certainly wacky enough to be very enjoyable.

Lu Over The Wall is released in UK cinemas on 8th of December 2017.