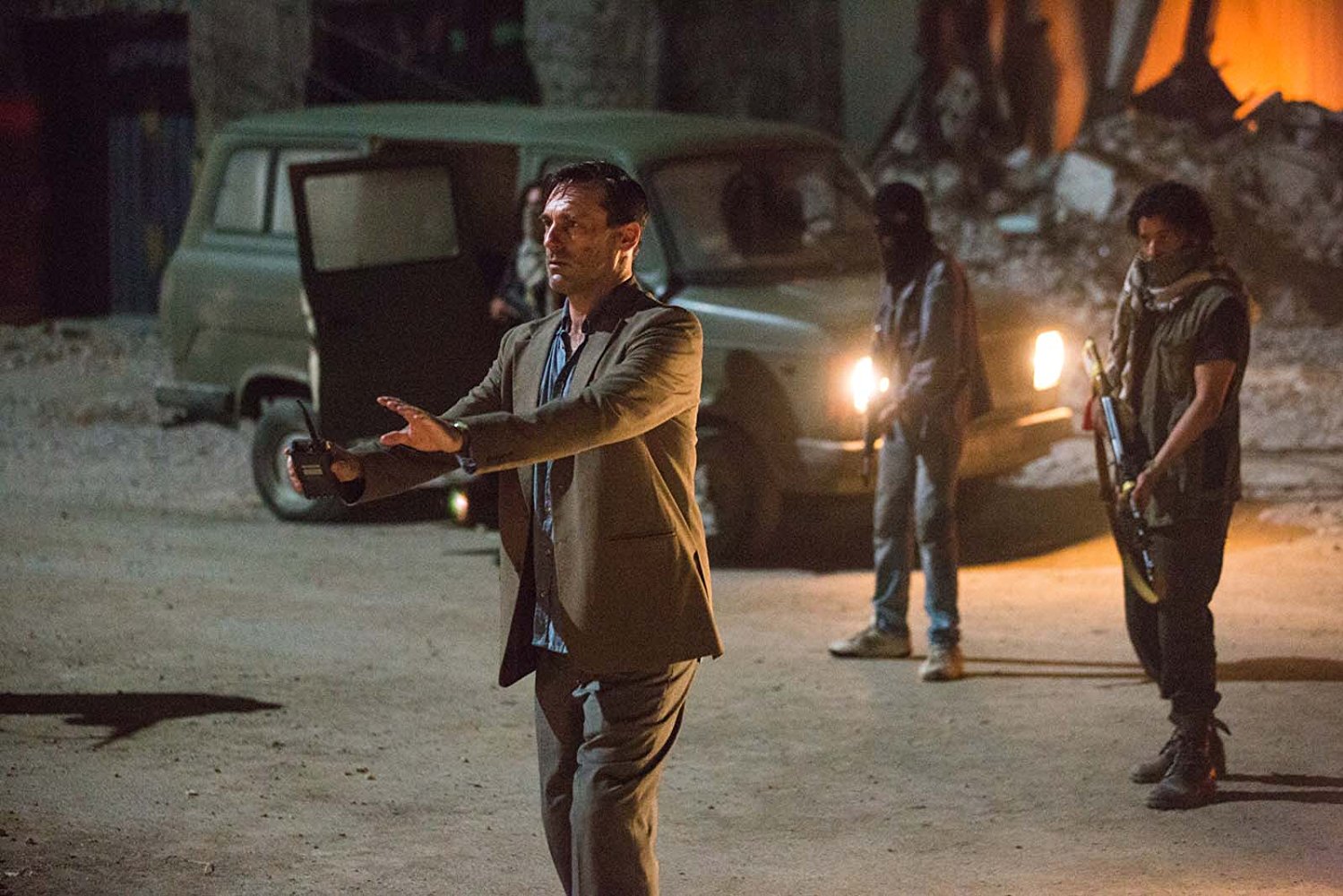 Published August 7, 2018 By Lee Hill
Review of: The Negotiator

The Negotiator never fulfills its promise. Its take on the complex history of Lebanon is shallow and clumsy to the point of being offensive to both Arabs and Israelis.

The film then jumps ahead to 1982, when Sikes is eking out a living as a low level labour arbitrator in the US and numbing his grief in generous quantities of booze. When Cal (Mark Pellegrino), his old buddy in the CIA, is taken hostage by the PLO in exchange for a political prisoner, Sikes is – for reasons that only make sense in movies and not entirely in this one – the only man who can negotiate his release. Recognising that his recent bartering skills have best been applied settling his bar tab, he is assigned a minder in the form of Sandy Crowder (Rosamund Pike), arguably the most nervous CIA agent depicted on film.

The bulk of The Negotiator, as the unimaginative title change suggests, is taken up with scenes of Sikes in a series of dimly lit rooms working his way through the various factions in Beirut to track down Cal and his captors. What little suspense these scenes provide is through all too familiar misunderstandings in which one side threatens the other with unspeakable violence until the other backs down. A cloying score, which never lets a moment pass without a burst of pan pipes, further dilutes the tension.

As a investigation of Mideast tension, it makes Tony Scott’s Spy Game with Brad Pitt and Robert Redford seem like The Battle of Algiers. The cast is good, but the huge chunks of faux cynical dialogue they are forced to shout at each other rarely pushes the plot forward. And while Pike’s character doesn’t have the obligatory romance with the leading man, she is essentially trapped in the long-suffering girlfriend role. Others like Dean Norris, Douglas Hodge and Larry Pyne do their best to bring distinction to their respective roles as CIA agent, CIA station head and US Ambassador, but they are ultimately reduced to background figures as the plotting grows more cliché.

The Negotiator may be the worst script by a major screenwriter since Aaron Sorkin’s disastrous Steve Jobs biopic (again a case where good actors were given unforgiving chunks of dialogue to talk-yell at each other). The Tony Gilroy who restored realism to the spy thriller with the Bourne films and forced the Bond producers to raise their game is absent here. Nor is this film as assured as Michael Clayton or the underrated Duplicity, two films Gilroy also directed. Director Brad Anderson, best known for his dystopian character study, The Machinist, strikes a frustratingly impersonal tone at the helm. While the murky cinematography by Bjorn Charpentier makes it seem as if none of the cast have had a bath recently.

As the film ends, one may be tempted to at least give it brownie points for bland efficiency except the debates between characters force us to take the film more seriously than it deserves. The Negotiator concludes with a heavy handed shot of the American flag fluttering in the wind and then the end credits feature news footage of subsequent events – Israel’s invasion of Lebanon, the Sabra and Shatila massacre in September 1982 and the bombing of the US embassy in April 1983 which killed both civilians and US soldiers. In its confusion, The Negotiator never fulfills its promise. Its take on the complex history of Lebanon is shallow and clumsy to the point of being offensive to both Arabs and Israelis. On the plus side, we can be pretty certain there will be no Negotiator Two: This Time It’s Topeka, Kansas.