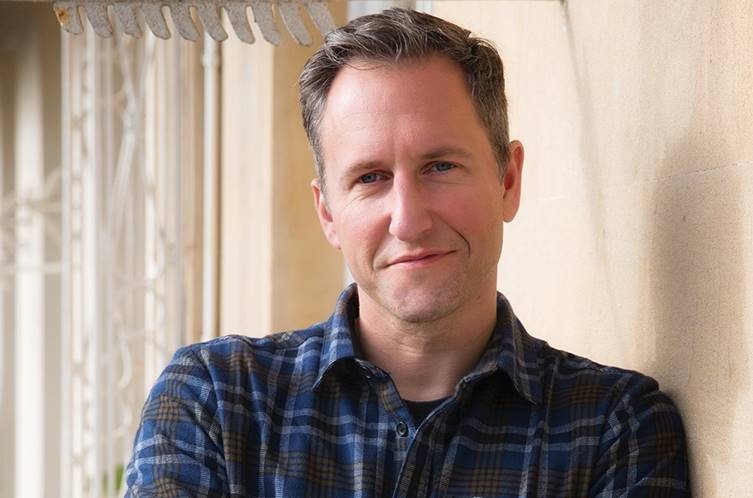 To start at the beginning, what was the genesis or the seed of the idea for PANIC BUTTON?JS: The model of how to make a film actually came before the concept. I’d made a short film with a group of trainees using a bunch of self-imposed restrictions for practicalities sake, to make sure we completed and delivered within the three-week timeframe of the training scheme, who were my employers. The rules were quite simple – no more than five minutes’ walk from the office (we couldn’t afford a van), no dialogue (we didn’t have any pro sound equipment), maximum of two characters (we had to pay professional actors) maximum 12 hours filming time split over two days (it was January), exterior locations only.
The film worked out great and the model inspired the motivation for a feature to be made in the same way. I teamed up with David Shillitoe who was a trainee on the scheme at the time, and we decided to experiment and see if we could find a feature to work up. The actual story inspiration arrived swiftly afterwards in the form of a dream. Alone on a plane at night with a laptop computer and sinister shapes moving in the shadows, I was agonising over whether to click send an email. When I finally did – I was devastated, realising it was going viral and that there was nothing I could do to stop it. The repercussions were going to be catastrophic. I told David, and he instantly agreed that there was indeed something very sinister about the world of Facebook, and the writing began from there! 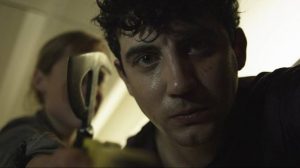 JS: We found that when in doubt – sticking to the rules always led to a creative solution. We also realised quite quickly that real-world social media horror stories were far more twisted and deprived than anything we could cook up between us, so we started taking inspiration from news stories in the media at the time. We found that we were working on an intense pot-boiler of a storyline and we had great fun working hard to keep bubbling along. We locked in on a treatment, and Frazer Lee came on board to write the first few drafts of the screenplay. David and I wrote more, and when director Chris Crow came on board, he too had his pass on the story, adding several new elements and drafts.
Production was intense but largely pleasurable from my perspective as it was such an exciting and ambitious thing to try and pull off. I remember investor’s faces upon telling them that we were going to build a private jet inside a church in Cardiff Bay. That concept alone was enough to get people going, and when they could see that we were deadly serious, they began to get more heavily involved. Once momentum finally kicked-in, there was no stopping us. The production took off and the excitement was palpable.

Is PANIC BUTTON an example of cinema’s foresight or anticipatory ability?

JS: I loved that the concept for Panic Button was an inspired and timely one, that’s what attracted people to the project and ultimately is the reason why it’s back on the shelves now. It was a gift that felt almost too good to be true, like all we had to do was hold up a mirror to all of our current online behaviour and take a step back – surely it had been done before, we thought. But finding few similarities in the indie film world, we really felt like we were at the forefront of something very exciting. It was pretty clear that social media and social networking was on the rise, but obviously none of us had any real idea of just how big it would become. We just took what we could see in plain sight and pushed it as hard and far as we could. So I really think it was just a case of right time, right place with the concept, I’m not claiming great foresight – I just think we got lucky!

An interesting aspect of the film is the claustrophobic nightmare of the characters when you consider that social media is about connecting people, and opening up the world. It’s a strange contradiction that could be seen as a reflection of the invasive and oppressive force on our way of life that social media has proven itself to be. Your thoughts on this reading of the film?

JS: Some early feedback on the script suggested that we should take the film away from the interior of a jet plane. To us, that was the joy of it – the characters were being confronted with their online behaviour with nowhere to run and no avatar (or emoji) to hide behind. It was claustrophobic and horrible and a real uncomfortable seat squirmer, and this had to be the point – in stark contrast to the unaccountability of the world wide web.\

From then to now, how do you think the film plays for the contemporary audience compared to the audience on its release?

JS: I haven’t had the pleasure of seeing the film with a cinema audience since 2011, so I’ve no real idea of how it plays out. The film is not without its flaws and criticisms but I’d like to think that its core ideas and strengths are still just as poignant today as they were then.

From writing PANIC BUTTON to now, do you feel a different writer-producer than you did back then?

JS: To this day I’m still very proud of the accomplishment that is Panic Button. Capturing that zeitgeisty lightening-in-a-bottle idea and seeing it all the way through to the big screen and beyond, remains one of the best things I have ever done. We all improve with experience, but I’d like to think I could still replicate that passion and energy for a great movie concept, the next time such timely inspiration strikes!

Following on from the previous question, filmmakers often see the imperfections in their films. If you were to remake PANIC BUTTON, would you change anything, or would any changes be a product of the person you are today?

JS: It’s not a personal story by any stretch, but I think I would probably work harder at certain elements of the script and I’m fairly confident I could make it a much tighter thrill-ride now that I’m a more experienced writer and filmmaker. There’s definitely scope for a modern retelling of this story, which could be a lot of fun to do!
What does this remastered edition of the film offer the audience and in regards to DVD, do you see it as an interactive format where you can communicate and share the film in different ways through the special features?
There’s a whole bunch of new extras including a commentary with David Shillitoe, Frazer Lee and myself which might be quite illuminating to some… there’s also more interviews and featurette type materials in there, walking through our journey of how we made the film. Hopefully it’s a great educational resource for budding filmmakers, keen to make the leap into their features.