So you’re at the Cannes Film Festival right now, are you able to tell us what you’re doing there?

P. David Ebersole : We actually have a new project that we’re here doing pre-sale on – it’s called House of Cardin and is about the life and designs of Pierre Cardin who we’re both obsessed with, so we’re very excited… it’s a dream project for us.

That sounds really exciting and I cannot wait to see it. Let’s talk about your current film Mansfield 66/67 – had either of you had an interest in Jayne Mansfield from a young age? Did you know much about her?

Todd Hughes: When I was very young, in the 70s, my mother used to collect occult books, she was very much into all that stuff,  and I remember seeing a picture of Jayne with Anton LaVey, and my mother telling me that she’d gone to the Church of Satan and had gotten naked, which at the time was very shocking to a young boy. For some reason, that really stuck with me since then and when I first met David, I told him the story and he was as intrigued I was, so we really delved into it and did the research.

Did you know about her tragic death?

TH: The story that my mum told me was that she ended up being beheaded in a car accident… so that was the whole myth that I grew up with, and I think that was the same for David.

DE: Yeah, I think I would certainly say that I knew of her, she’s what I call a Hollywood Boulevard star. You go to Hollywood Boulevard and there are certain stars that live on forever, and when I was a kid, as someone who grew up in Hollywood and went to Hollywood High School, people like Marilyn, James Dean, Jayne Mansfield…those were the images that you saw everyday of your life growing up there. 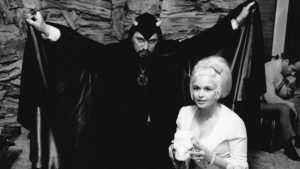 Can you explain the decision to take a more lighthearted approach in your story-telling? I mean the film is by no means a straight forward retelling of the story.

DE: I think for us, Jayne and her life were very public, very fun, very colourful and actually ultimately very positive… and it’s sort of like what John Waters said, which set a tone for us about how to approach her… “for me I don’t look at Jayne’s life as a tragic one, she would have wanted to go that way,” said John Waters. And you do sort of feel like there’s something about her entire life that is kinda connected to who she was. Which is why I think we had fun with Jayne along with her.

TH: … and I also think that the Church Of Satan was very similar to Jayne, it was fun and funny, it wasn’t  evil and scary and serious. And you know just the idea of the church of Satan conjures up such evil in the minds of men, you know we  didn’t want to scare people because it really wasn’t about that.

DE: It was kinda new-age 1960s philosophy of “live and let live,” and be who you are in the moment, it was also kinda anti-Catholic church, anti growing up with the seven sins or being told that you’re bad and that everything you want in life is bad. The Satanism that came about in the 80s and 90s, which was a much scarier vision of Satanism, was in the wake of Charles Manson and movies like the Exorcist, which came along and turned things quite darker, but this particular moment was much more playful than that. 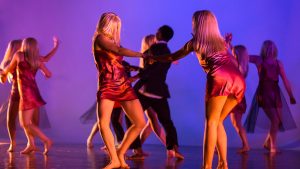 You have an amazing array of interviewees here, a list which includes Hollywood legend Tippi Hedren, John Walters and many more. Was there anyone you were desperate to have on, but who just didn’t want to take part?

DE: Yes, there were a couple, we really wanted Siouxsie from Siouxsie and the Banshees who wrote the song Kiss Them For Me [an ode to Jayne Mansfield]. She answered back through her publicist saying that she said all she had to say in the song.

TH: We were at Engelbert Humperdinck’s house to interview him but he called off the interview at the last minute after calling up her daughter Mariska Hargitay and asked “do you know about this documentary” and she said no. We told him from the beginning what kind of movie we were making, it took 8 months to set up the interview, and we sent a crew to go meet them, but then he said if it’s not authorised then I can’t be in it.

Do you know if Mariska Hargitay has seen the film?

DE: We believe she has not seen it, because we talked to producers of hers. She was a producer on a documentary at the same time that we were out on the film festival circuit, and we got to be friendly with these people who just happened to be producers on her film, so we know she hasn’t.

Did you get to meet her at any of these events?

DE: No we have not met her, we took the decision that we were not going to try to talk to the families on either side. We felt like what we were interested in in this movie was the way in which a myth lives on in the culture, much more than trying to track down the veracity of these wild stories. We liked that the stories were wild and that they may or may not be true, and that they may only be true in the retelling of them. So we weren’t really looking for someone to say “actually my mother never did that,” it wasn’t what we were after.

There is an interesting balance between pure showbiz and academia in the people you chose to interview – can you tell us more about that?

TH: It’s funny because we were talking about this last night, about some peers of ours who are very content to tell the story and present all the photographic evidence and we’re much more interested in the bigger story…

DE: … yes the culture, and what was going on around her and how that might have shaped both her life and also our perceptions of her life as they carry on. So to us that was always part of it. We were approaching it knowing that we wanted to do an evaluation of 1966/1967 along with using Jayne as a catalyst for talking about getting caught between the America of 1950s and 1960s. There was a great book ‘Jane Mansfield and the American 50s’ by Martha Saxton, and it was a book that we read that started to give us the idea of talking about her from a feminist perspective, and trying to place her into that lexicon. Also the contrast between my way in, and Todd’s way in to this story is that my mother is a 1970s feminist who would have been completely on the other end of the spectrum in the way she would have seen Jayne Mansfield. So I was looking at it from that “son of a feminist” filter, so that’s how a lot of that came into the film.

We know that she was without a shadow of a doubt one of the original gay icons, but would you say that she was also a feminist icon?

DE: Retrospectively yes, in the moment no. I think a lot of it has to do with the reclaiming of sexuality through an era which fell in love with someone like Madonna, that we could say… but wait, let’s look at Jayne, she owned her sexuality, she had 5 children and wanted it all, had a career, supported her whole family and all of her husbands and was looking to enjoy and have fun with her sexuality. So she represents feminism when you look backwards.

TH: Like Pierre Cardin who we are doing now, she really refused to abide by the rules. Fox told her, you cannot be a movie star and get married and have kids, and she said I’m going to. She never let anyone stop her.

Do you think she was a good actress, or was she just a caricature?

DE: My opinion and Todd’s might be different, but my opinion is that she was an excellent comedic actress who, when she got the rug pulled from under her by Fox taking away her contract, then she started to have to be in independent B-movies – the scripts were awful and what she had to do on screen was awful.

TH: I have to say she was brilliant, a really brilliant performer… because you know we’ve seen all her movies now, and given the right material and the right direction she’s fantastic. She’s unbeliveable, I think she was a genius, very talented.

Finally can I ask you a bit more about the Cardin project? What can you tell us about it and how you intend to approach it?

DE: I think this will be really different in that he’s 95 years old and he’s alive, and it’s kind of more of an overall career retrospective of what he created and how he’s managed to stay one of the sole owners of a large house of fashion and not given in to corporate interest. So I think it’s an appreciation of him as an artist and a businessman. There’s certainly some controversy in his life but, you know Jane was so fun because we were coming at it from that side of rumour and gossip and hearsay, and in this we have an authorised documentary about a man who’s here to tell us his own story, so its a very different kind of way in.